Welcome to the Recycle Bin Project.

This is an initiative to keep files in flight.

What is a Recycle Bin?

A Recycle Bin is a folder on a personal computer that collects unwanted files and serves them to the Internet. 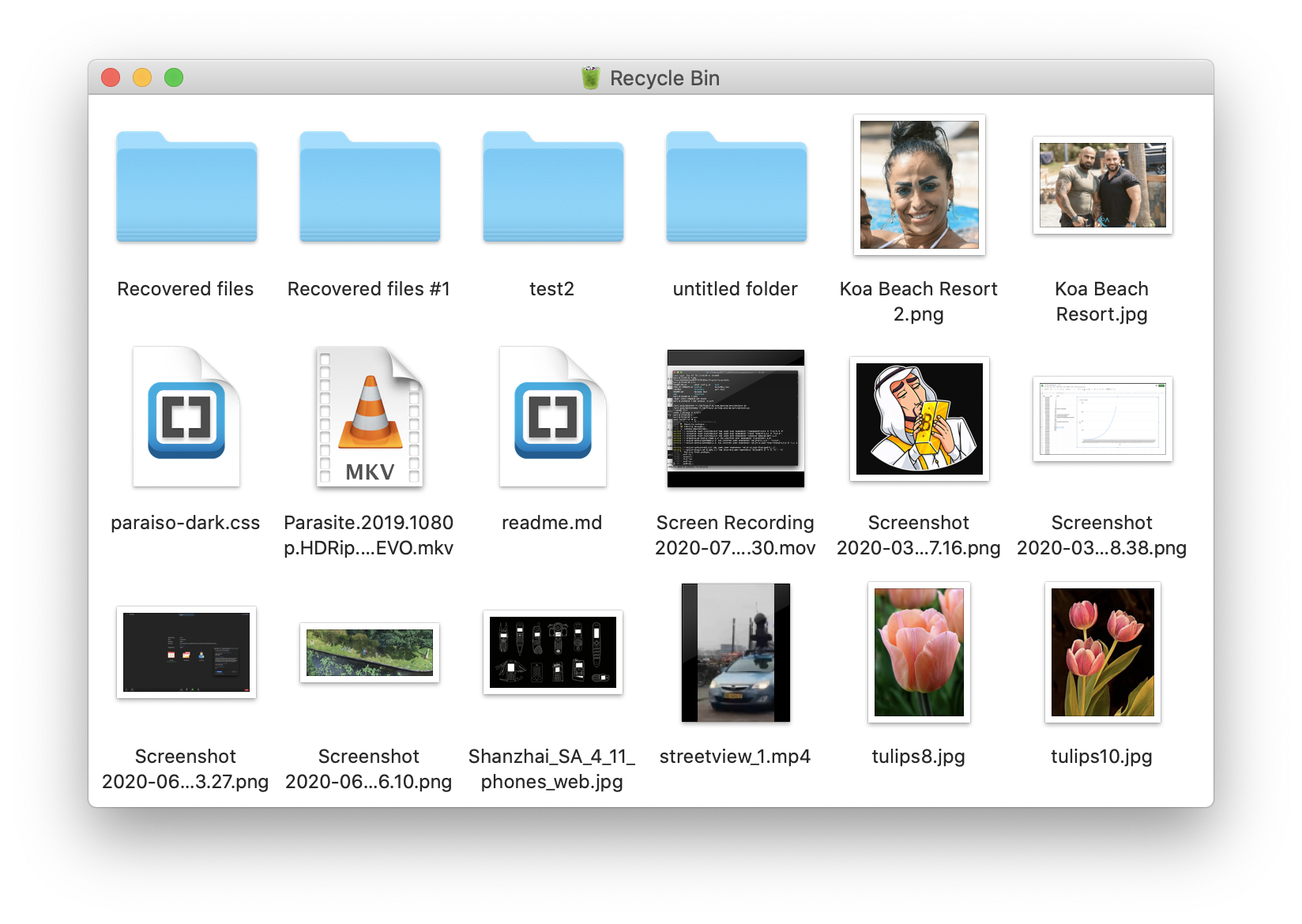 How does it work?

The Recycle Bin is networked.

This folder is served to the Internet using Hypercore, a peer-to-peer networking protocol that enables a direct and uninterrupted stream of data to be exchanged between two devices.

Every Recycle Bin has an automatically-generated unique public key.

It works much like a tradional URL. Anyone with this key will be able to view and download the contents of its respective Recycle Bin over the Internet. However, only the owner of the Recycle Bin can add, remove, and change these contents.

The Recycle Bin exists in many places at once.

With its public key, peers can clone a Recycle Bin into their own desktops and browse its contents. Everyone with a clone of a Recycle Bin recieves its updates in real time. This is possible as long as the owner's computer is on and connected to the Internet, or another computer is seeding the Recycle Bin.

By cloning and seeding each others' Recycle Bins, friends can create a peer-to-peer social network consisting of their trash. 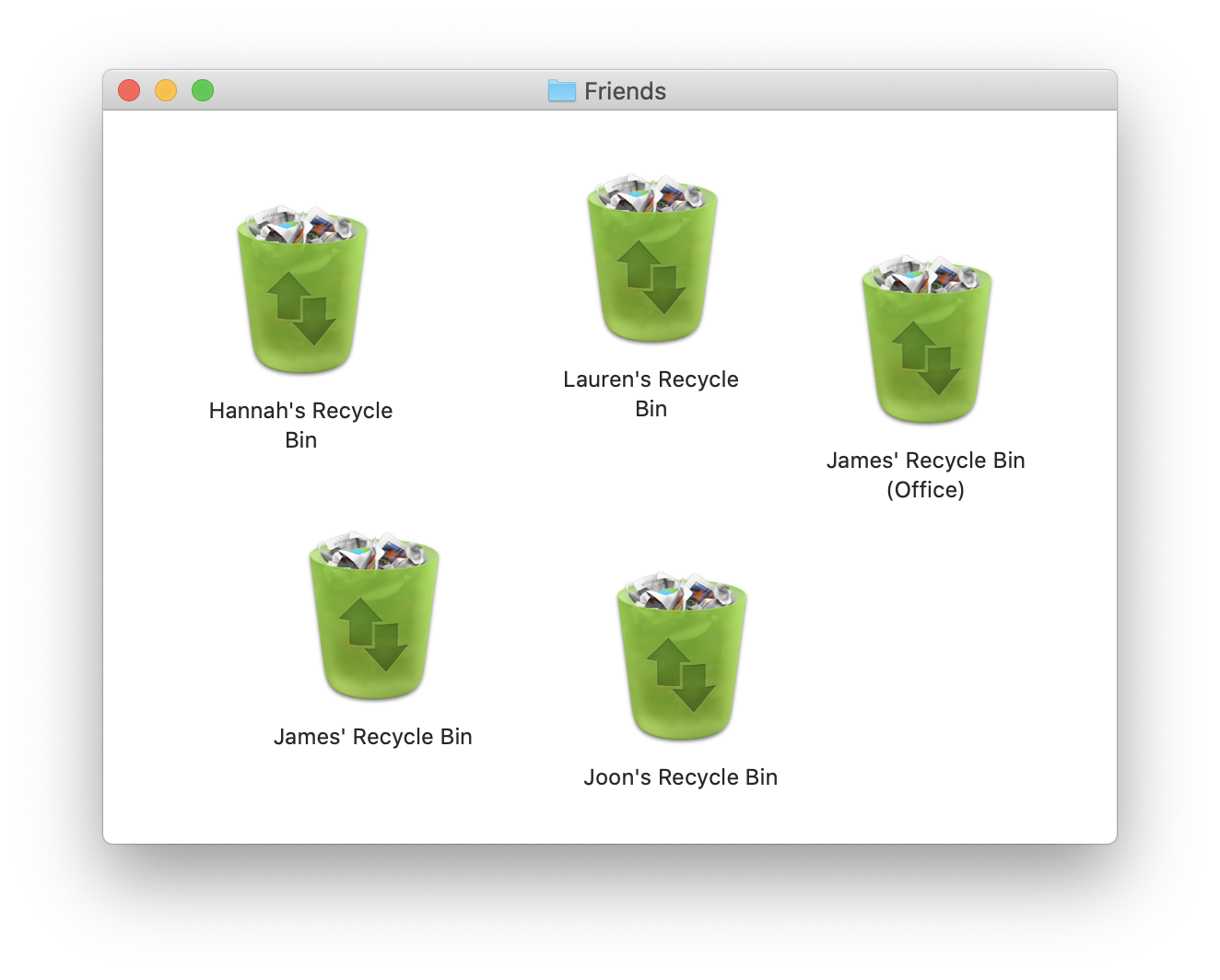 The Recycle Bin is accessible from anywhere.

The Recycle Bin is optionally coupled with a 'Move to Recycle Bin' shortcut, which means that a user can move files to their Recycle Bin from anywhere in Finder, just like they can with their traditional Bin! 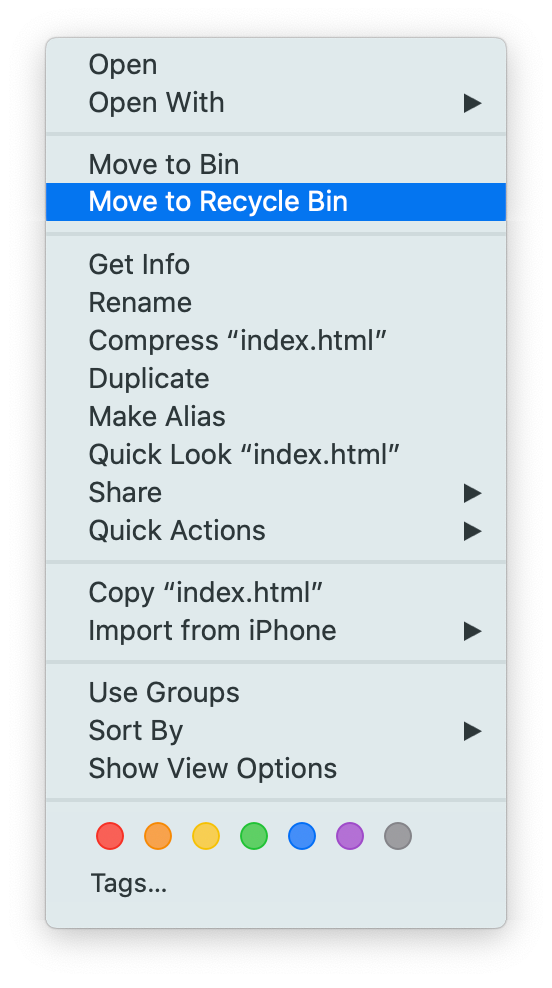 The Recycle Bin intervenes when necessary.

Why should I have one?

It's an intrinsic part of their nature. As a matter of fact, files replicate all the time. For instance, when editing an image, a computer will contain at least three copies of that image: the first is the original version, the second is the version being used in the image editor and the third is the version that is diplayed on the screen.

Today, everything about the way our personal computers are designed to engage with the Internet goes against this nature: files are contained, commodified, owned, sold and even leased. Our understanding of files is being warped by our human-centrically designed experiences of them.

The 'traditional' Bin is the ultimate example of this notion: As users, we aquire files, consume them, hoard them and eventually, dispose of them, hennce the term "end-user". We need a counter-balance for this behaviour.

Files can do different things in different places. If they want to replicate, why shouldn't they do so across multiple devices?

The value of a file is defined by its context and use and, as users, we owe it to files to create the means of 'encountering' or 'finding' them in different contexts and 'using' or 'changing' them in our own ways, rather than seeking them out from known distributors and consuming them as we have been semantically instructed to.

Files are a means of inter-personal communication.

A networked social interaction always starts with a file.

Be it a chat message, an email, a social media profile, a video call, or an address book, files are most defnitely at the center of our networked social identities. We might not always be aware of it, but in every one of our micro-interactions with well-known social networking interfaces, we are writing these files.

Where can I start?

There are currently two ways that you can set up a Recycle Bin.

The first is by using the Recycle Bin Manager, a user-friendly desktop application that creates your Recycle Bin for you, serves it to the Internet and enables you to import and seed your friends' Recycle Bins. 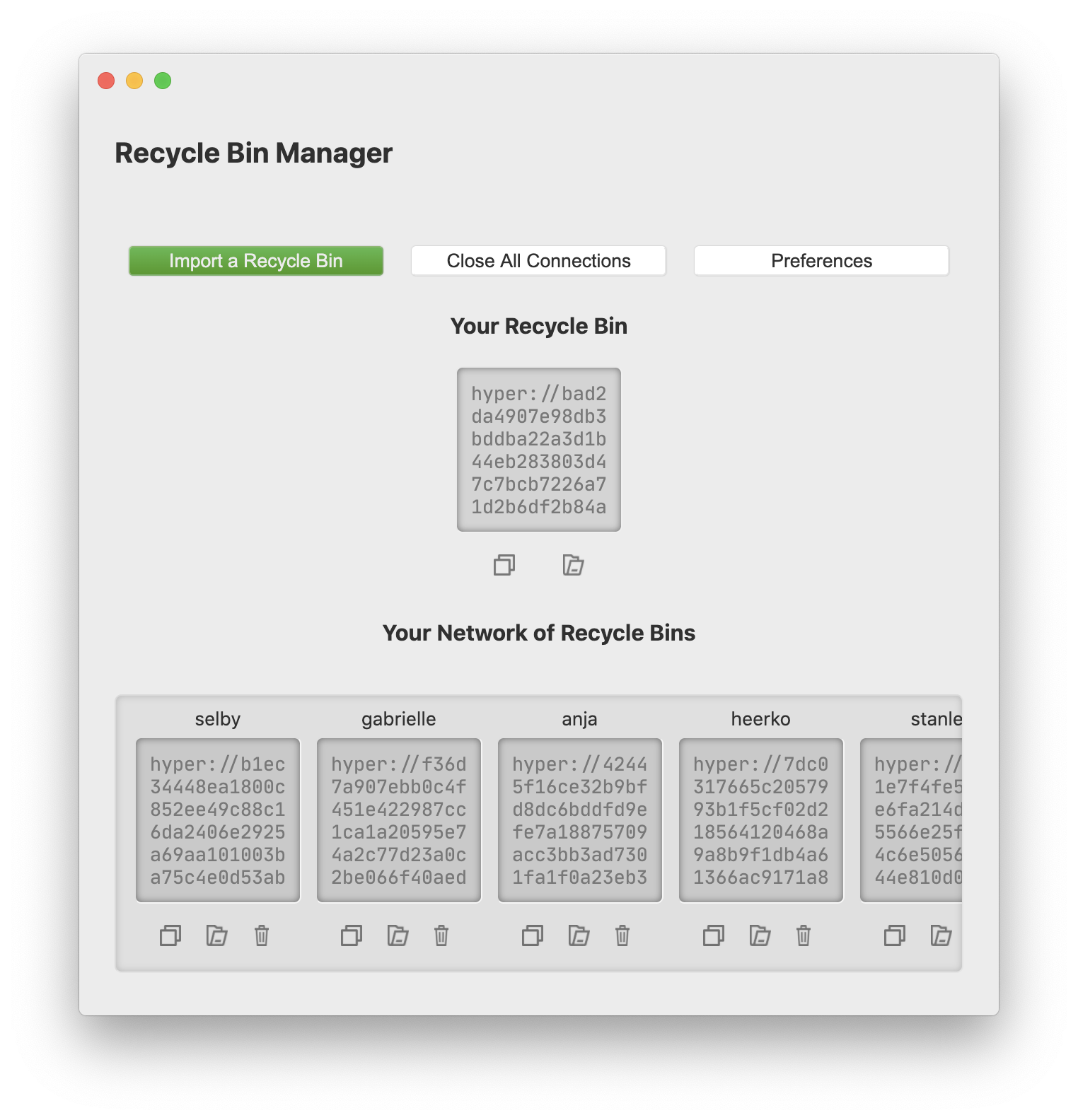 The second is by following this DIY tutorial, which will take you through manually setting up a Recycle Bin, configuring the necessary asynchronous scripts and serving its contents to the public domain. 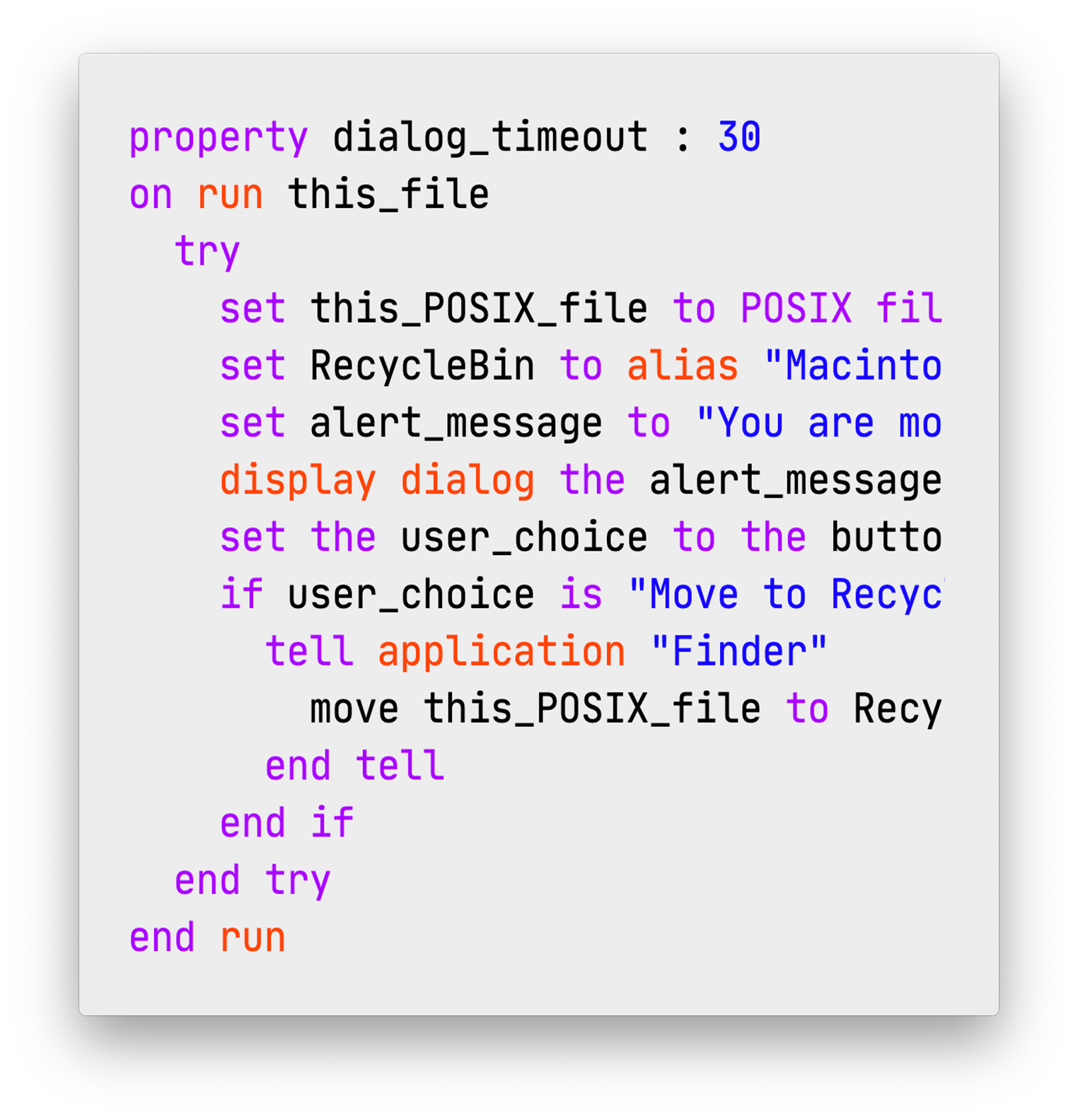 This project was initiated and developed by Karl (moubarak.eu), and the Reycle Bin Manager was written and packaged by Rick (happytechnology.nl).

This project and all its sub-components (including the application, the DIY tutorial and this website) are protected under the Creative Commons Attribution Share Alike 4.0 International license. In short, this means that you are allowed to copy, appropriate, and even profit from this material, but you are required to republish it under the same license (it stays in the public domain).